The Plague, by Albert Camus - "When Rieux entered the room, the old man was sitting up in bed, at his usual occupation, counting out dried peas from one pan to another."

"From Tarrou's notes we gather that the old man, a dry-goods dealer by occupation, decided at the age of fifty that he'd done enough work for a lifetime. He took to his bed and never left it again, but not because of his asthma, which would not have prevented his getting about. A small fixed income had seen him through to his present age, seventyfive, and the years had not damped his cheerfulness. He couldn't bear the sight of a watch, and indeed there wasn't one in the whole house. "Watches," he said, "are silly gadgets, and dear at that." He worked out the time, that is to say, the time for meals, with his two saucepans, one of which was always full of peas when he woke in the morning. He filled the other, pea by pea, at a constant carefully regulated speed. Thus time for him was reconed by these pans and he could take his bearings in it at any moment of the day. "Every fifteen pans," he said, "it's feeding-time. What could be simpler?"

Peas I - Cut out words from The Plague randomly glued on glassine.

Giclée prints - stills from the video 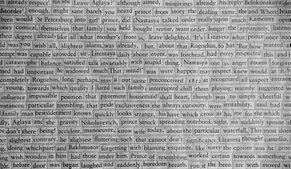 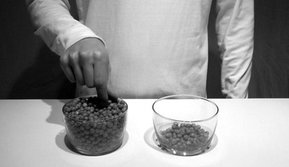